Does your family tree have "Gaps of Unusual Size"?

Most of us have them. If we could explain them or even get rid of them, we would have greater success in our family tree research.

Unexplained gaps can be the reason for your family tree's brick wall. There are many kinds of gaps to look for. Some gaps can be explained, others cannot. If left unpursued, we may never uncover the "full truth" about the family. Below are some examples.

Gap #1 - too many years between births of children 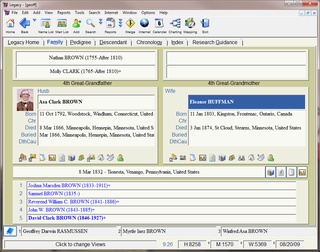 In this image (click to enlarge), look at the birth years of the children:

All seems normal except for the 6-year-gap between the births of Samuel and William. As a rule of thumb, look for children to be born between 2-3 years apart.

These "gaps of unusual size" deserve your attention and explanation. What accounts for this gap?

What about the McCall family here? All looks pretty good until you notice the 8-year-gap between the 6th and 7th child. This actually is more common to have a gap between the second-to-last and last child. Here, David may have been a "surprise" to the parents, or, maybe we're missing children born in 1850, 1852, and 1854. Could these potentially missing children have clues to the family's puzzle? 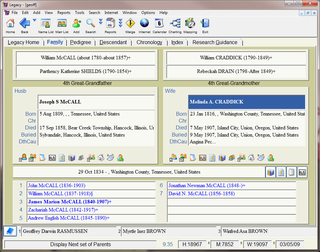 After a couple married, children usually came within the first year or two. In this example, David and Clara's first child came more than four years (1872) after their marriage (1868). Why? I don't know. Trouble getting pregnant? Before-their-time birth control? Maybe there's a missing child born in 1869 or 1870. Left unexplained, there's a chance that the family is not complete. 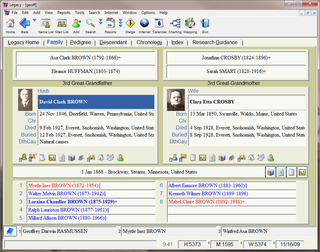 Gap #3 - not enough time between children

In the Clark family below, the births of the first two children are suspicious.

Each of these suggestions deserve further investigation. 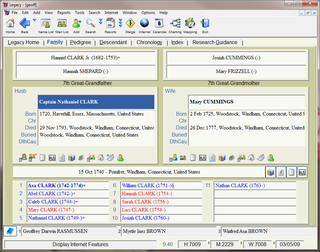 Browsing my family tree for gaps of unusual size was surprising. After years of being stumped on some families, identifying these gaps has given me renewed hope. Good luck to all in filling in your gaps!

You have missed out on another explanation for gaps in families, perhaps for reason of being delicate.

Syphilis was fairly common up to the 1940s. In the early stages of the disease in a woman there can be difficulty in conceiving, later stillbirths are more likely, then viable babies that have congenital syphilis and finally, sometimes, healthy babies.

So if you have a family with a gap, with the gap ending with early deaths of the infant followed by children who have inexplicable or mysteriously-named illnesses, you ought to think of syphilis as an explanation.

In example #3, it is also possible that the month of birth for child #2 is incorrect. Had this child acturally been born in November or December, both children could still belong to the same parents and be born in the same year. Getting pregnant within months or even weeks of a delivery was not unusual. It is also possible that the boys were twins with one twin being born a month earlier than the other. In a line that I am researching, twins born a month apart happened not once but twice to the same mother.
You have to consider everthing when dealing with Mother-Nature. If genealogy research has taught me anything, it is that nothing is impossible and you should not be surprised at anything you find.

I have several families that have children with birthdates less than nine months apart - for some of these families, I have information indicating that at least one (sometimes both) of the children was adopted.

Or the gap could just be normal. There's a 10 year gap between me and my sister. Nothing to explain, the cycle just eventually lined up.

There are as many reasons for mysterious gaps as there are gaps, it seems. Perhaps a gap was created when one woman died, and the father remarried a woman with the same given name.

Also, some people had babies baptized in "groups"; when you have more than 2 children with the same baptismal date, be suspicious! At the minimum, check the original records. Triplets who survived were very rare in earlier days, and more were practically unheard of. There might be newspaper articles if it happened in the 1800's.

As for other gaps, check the occupation of the father/husband at the time. Often fishermen, or seamen, were gone for long periods; miners went to work in "foreign" mines to get a stake for the family; and don't forget military service.

Is it reasonable to accept that a woman over 50 was having babies in the 19th and 18th centuries? Not likely. Back to the original point - check for a remarriage.

John Powell's comment is highly relevant but is often overlooked because of present day stigmas attached to syphilis. If syphilis is the cause of the gap it is usually about 8 years, because that is the time that syphilis takes to "cure itself". It is laso worth noting that in the 19th century syphilis affected an average 10% of the population - perhaps more in urban areas.

Here is another possible reason for a gap which was quite common in the genealogies of Hawaiian royalty. A person of one generation marries the child of his sister/brother (a person one generation below)or an aunt/uncle (one genration above). Legacy does not quite allow arranging a chart to show this because the lines can't be moved independently.